For many years, the cannabis market has been dominated by big firms. But if emerging trends are anything to go by, the future is entirely different. The industry is steadily becoming receptive to small-batch, also known as craft producers.

Small-batch marijuana firms offer a variety of high-end cannabis products. These range from smokable flowers to edibles, topicals, and even tincture oils.

Many weed advocates already project that small-batch cannabis producers will play an integral role in shaping the fortunes of the marijuana industry. However, they’re also cautious enough to note that the future of craft producers will depend on how favorably the industry evolves. If the sector becomes too hostile for them, they’ll quickly exit the lucrative cannabis industry, leaving it to a few conglomerates.

But for you who’s stumbling upon the words ‘small-batch’ and ‘craft’ cannabis for the first time, you’re probably wondering what these terms imply and why a prospective investor would consider entering the industry as a craft producer. Well, you’re in luck.

In this article, we highlight what small-batch cannabis producers are and then focus our attention on the advantages of growing cannabis using the craft technique.

What Is Small-batch Cannabis?

There’s some debate on the actual definition of small-batch cannabis goods. Some people define them as marijuana products cultivated by implementing a concept of quality over quantity. Others define them as cannabis that begins with true seeds instead of clippings or clones.

Regardless of the school of thought, you choose to subscribe to. One thing is for sure. Small-batch cannabis products boast higher quality than their mass-produced counterparts.

This is unarguably the most significant advantage of opting for small-batch marijuana production.

Many believe that the quality of cannabis end-products has everything to do with the manufacturing processes applied. Well, this isn’t entirely true. Farming methods also play a critical role in determining the quality of weed products.

The fact that craft growing techniques involve cultivating relatively few cannabis plants reflects favorably on the quality of the final products. That’s because small-batch plants receive more attention throughout their growth cycle from germination to harvest. The results are cannabis buds rich in both cannabinoids and terpenes.

Cannabinoids are the specific compounds in weed responsible for most of the plant’s therapeutic properties—these compounds number in the hundreds. But the two most popular ones are cannabidiol (CBD) and tetrahydrocannabinol (THC).  Others include cannabinol (CBN), cannabichromene (CBC), and cannabigerol (CBG).

On the other hand, terpenes are compounds that give cannabis extracts their signature tastes. Common ones include linalool, myrcene, caryophyllene, and pinene. 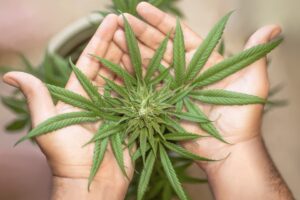 The concept of organic farming has been on many people’s lips for some time now, and understandably so.

Many consumers are becoming increasingly aware of the inherent risks of inorganically-produced goods. Smart cannabis producers have already capitalized on these shifting attitudes and begun implementing organic farming methods.

As already mentioned, craft cannabis growing emphasizes quality over quantity. Growers aren’t primarily driven by the profit motive. Instead, their focus is on superior-quality, first-grade products.

However, note that organically-grown cannabis plants can still produce incredibly rich buds. The implication is that a small plantation of, say, 50 plants may still yield a higher output relative to a larger farm of 1000 plants.

3. Plants Can Be Grown Outdoors

Both small-batch and mass-produced cannabis plants can do remarkably well either indoors or outdoors. However, it’s far easier to grow craft marijuana outdoors than it is for their mass-produced counterparts.

For starters, the fact that craft cannabis plants are few makes them easier to tend to. Watering and feeding these plants is especially a breeze.

Even if you live in arid and semi-arid climatic zones, you may never have to invest in capital-intensive irrigation systems. You need to water your weed plants frequently during their seedling stages. After that, you can make do with occasional rainfall.

Craft cannabis plants are also better suited for stealth growers. You can cultivate the plants in your more extensive tree plantation without attracting undue attention from your snoopish neighbors. 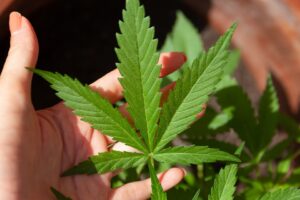 4. Is Friendly To the Environment

Small-batch cannabis producers also play a more significant role in reducing the carbon footprint. That’s mainly due to their adoption of readily-available organic fertilizers and pesticides.

Numerous actions can trigger the emission of greenhouse gases. These include the application of inorganic fertilizers and pesticides.

What makes inorganic fertilizers and pesticides a grave danger to the environment is that nearly all such products are manufactured in industrial plants using processes that result in the emission of greenhouse gasses. There’s also the aspect of transporting them to various retail outlets worldwide, which further contributes to environmental pollution.

5. Improves the Fortunes of Small Farmers

We began by mentioning how large corporations have dominated the cannabis industry for years.

There’s nothing inherently wrong with purchasing weed from established firms. But if you’re looking for personalized products and services, you’d do well to buy marijuana from small-time sellers.

Buying cannabis from craft traders offers such businesses an opportunity to grow. As a consumer, it’s also comforting to know you’re contributing to expanding the local economy.

Most importantly, craft cannabis comes from small family-owned farms with a passion for marijuana. It doesn’t hurt to help them nurture their passion for weed while also receiving premium-quality products in the meantime.